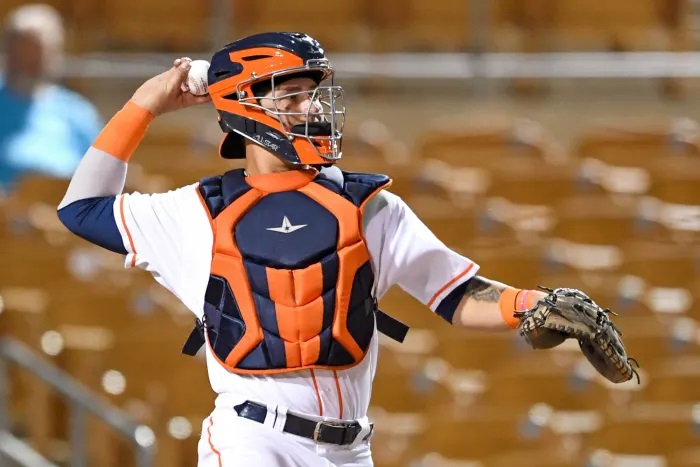 The Houston Astros lost their 1st and 2nd-round draft picks in the 2020 and 2021 MLB draft. Despite this, GM James Click has continued to build the Houston Astros Farm System. The organization has decided to let top-tier talent such as Gerrit Cole, George Springer, and Carlos Correa hit free agency and find new homes elsewhere. However, the Astros have been able to remain strong contenders in the MLB Playoffs.

While there are plenty of prospects within the Houston Astros Farm System that are destined to reach the Major Leagues, we’ve highlighted our top six below.

Korey Lee was added to the Houston Astros Farm System in 2019 as the catcher was drafted in the first round of the MLB Draft. While the Astros currently have Martín Maldonado and Jason Castro on their big league roster, it’s clear that Lee, who is ranked as the 2nd best prospect in the Houston Astros farm System according to MLB.com.

Further, while Maldonado is the best catcher in the Houston Astros Farm System, Korey Lee is much better at the plate. Last season, Lee hit .229 in 35 at-bats for the Sugar Land Space Cowboys. Given that he’s playing less than an hour away from Minute Maid Park, Korey Lee could see time in the big leagues this season, especially if there’s an injury to Maldonado or Castro.

Hunter Brown has been able to maintain a mid-90’s fastball, while reaching 99 MPH. Furthermore, he has a devastating curveball, along with a solid slider and changeup. After earning a promotion to AAA last season, Hunter Brown starts the 2022 season with the Sugar Land Space Cowboys. While the Astros organization has remained patient with SP Forrest Whitley, it’s Hunter Brown that could prove to be the next big pitcher out of the Houston Astros Farm System.

Prior to the 2017 MLB Draft, Joe Perez converted from pitcher following Tommy John surgery. It’s been a long road for the infielder, but he really came alive last season when his play forced the organization to promote him to AA Corpus Christi.

Last season, Perez hit .267 in 281 at-bats. Further, he had 19 doubles, 8 homers, and 27 RBIs. If he can continue to develop this season, Joe Perez could see himself once again rising within the farm system and on his way to AAA Sugar Land. With Yuli Gurriel set to turn 38 this season, the Astros could turn to Perez as the eventual replacement at first base.

It’s been a rough couple of years for Colin Barber. The outfielder was selected by the Astros in the fourth round of the 2019 MLB Draft. However, after the 2020 season was postponed, Barber’s 2021 campaign was cut short due to shoulder surgery.

Barber has only spent his pro career in A ball, he could very well see a promotion to Corpus Christi soon. While the Astros are stacked in the outfield at the MLB-level, having too many talented players at the position is a good problem to have. Furthermore, the organization has shown, especially with George Springer and Carlos Correa, that they’re unwilling to do long-term deals with their players. If there’s an opening in the outfield over the next few years, it could be Colin Barber that fills that role.

Last May, Tyler Ivey made his MLB debut for the Astros after the starting rotation was hit by the injury bug. Ivey struck out three in his 4.2 innings of work for the Astros, although it didn’t end very well for the right-handed pitcher.

Following his start, Ivey hit the IL with elbow soreness. He’s made a full recovery, but was DFA’d prior to this season after he was removed from the 40-man roster. While the Houston Astros Farm System is full of talented pitchers, Ivey has a solid pedigree. He’s been able to keep his ERA down throughout his minor league career, despite a rough start in his debut for the Astros. If GM James Click is able to remain patient and let Tyler Ivey come along at his own pace, he could find his way back on the 40-man roster soon.

A 5th round selection in the 2020 MLB Draft, Shay Whitcomb played really well in A ball last season. He’s begun this season with AA Corpus Christi where he’s already accumulated 7 hits and 1 homer in 19 at-bats for the Hooks.

Whitcomb has some much-needed versatility in the infield, which the Houston Astros Farm System desperately needs. If Shay Whitcomb continues to impress scouts at the AA-level, he could very well earn a promotion to Sugar Land. From there, he could find his way onto the MLB roster as a utility infielder by 2024.